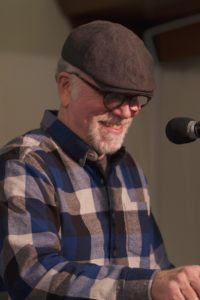 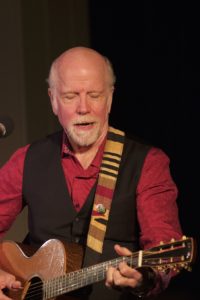 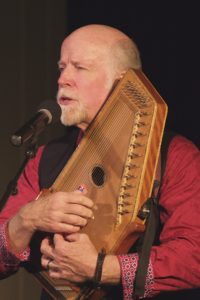 From the opening song, “A Perfect Day” from his latest CD “Ghost Light” to “Under the Double Eagle” march played on the hammer dulcimer, to “How Can I Keep from Singing?” sung acapella except for the prayer bowl accompanying him, John McCutcheon played for the Club Saint J more than twenty songs in a concert with meaning for family and our nation.

Entertaining, thoughtful, and rousing, John played songs most of us had never heard before interspersed with old favorites, especially after the intermission. Guitar, banjo, autoharp, piano and fiddle he masterfully used to accompany his songs, some very emotional like “The Streets of Sarajevo,” “Story of Abe,” and “Happy Adoption Day.” “Alternative Facts” really poked fun at current politics. “Me and Jesus,” a thoughtful song.

A special treat…John introduced Eli Mabamza from Congo who sang “Tue Mani” in his native language, accompanied by his own brilliant guitar playing. Eli is a political refugee living locally.

When John sang “Kindergarten Wall” the whole audience joined him in the crowd favorite. Speaking of favorites, he performed “Soup” with rousing audience participation. “Christmas in the Trenches” brought up a bit of eye moisture as it usually does. His name was Francis Tolliver.

This concert was John McCutcheon’s fifteenth at St. James’, a yearly family reunion, John, Tommy, his Road Manager, and the Parish and many other friends. Next year?