“I hereby give canonical consent to the organization of St. James’ Mission, Centerville,” wrote William Ingraham Kip, the first Bishop of California on February 23, 1877.  Thus began the history of St. James’ church as a part of the Episcopal Diocese of California. 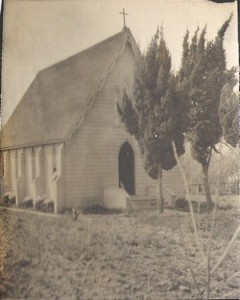 The actual history of the church began earlier.  In 1862, “When Centerville citizens were discussing hotly the implications of abolition and secession, when a great spring flood changed the surrounding landscape, when local vigilantes found it necessary to deal with cattle rustlers in their own way, a group of prominent pioneers gathered together to discuss the possibility of establishing an Episcopal Church.  The Presbyterians graciously extended to them the use of the Presbyterian Church erected nine years previously in 1853.” 1

Services were held in the Presbyterian Church until Christmas of 1866, when the first service was held in the new St. James’ Episcopal Church.  Captain George Bond donated property for the building and he, Howard Overacker, Caleb Haley and others gave generously of their time, talent and finances for the church.  The location was at what is now Fremont Boulevard and Thornton Avenue in Fremont, California.  The design for the church was known as “Carpenter’s Gothic.” Captain Bond bought an organ in the East and had it shipped around the Horn.

The church was consecrated September 27, 1867 by Bishop Kip2, and seventeen persons were baptized that day.  Mrs. Elizabeth Randall was the first person baptized that day, and one year later she was the first person confirmed from St. James’.  Twenty-four families were on the church rolls that year, with such familiar Township names as Bond, Overacker, Trefry, Marston, Blacow, Cameron, Frick, Stevenson, Tyson, Chadbourne, Bonner, Emerson and Haley.  John Thomas Stevenson, one of the early pioneers of the Fremont area, was also a member of St. James’. His daughter, Caroline (Carrie), was a member of the St. James’ Guild.3

The first minister was the Rev. S.S. Etheridge of San Jose.  Not until 1869 was there a resident clergyman, the Rev. Edward Warren, and he was “boarded around town” by various church members.  On February 23, 1877, Bishop Kip gave consent for St. James’ to organize as a mission in communion with the Diocese of California.  St. James’ attained parish status on April 12, 1948.

Of the early clergy who have served St. James’, we have one story of the Rev. T. C. Crump (1888-1901) who was apparently quite colorful.  On the occasion of one Memorial Day he caused the chancel to be decorated as a grave and had two soldiers fire a volley in the air, after first warning his parishioners that they might go outside “if musketry disturbed them.”

Whenever we feel discouraged about church attendance it is easy to forget that this is not a new concern.  A letter dated July 11, 1940, written by the Rev. Allen Pendergraft to the Rt. Rev. Karl Morgan Block, bishop coadjutor of the diocese, reflects problems we’ve all heard. Pendergraft had arrived only recently at St. James’ and he wrote:

The average attendance for the four Sundays I have been here is twelve.  The average attendance for the same period over the past five years is fifteen, but one of those four Sundays is always a communion Sunday, which boosted attendance.  There were only four in church the Sunday after I came in tired and on the disillusioned side from Tahoe.  I did everything I could in the following week and in spite of the vacation slump there were eighteen the following Sunday.  The most encouraging aspect of last Sunday’s congregation was the presence of a number of young people who had not been to church in years, I’m told. … I sowed a few seeds concerning a choir and a half dozen or so (youth who have been going to the Congregational Church in Niles but whose parents are Episcopalians) cornered me and wanted to start a choir for St. James’. We have a woman here who would be willing to direct it.  The only difficulty is that we have no vestments whatever, and no cross to use in the processional. 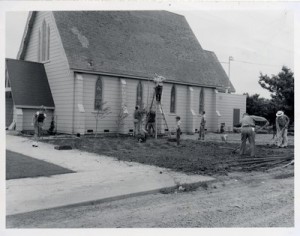 Since its early beginnings much growth has taken place at St. James’.  A rectory was built in 1884, and replaced by a new one in 1921.  In 1925 a Guild Hall was built to provide space for church school classes and social meetings.  St. James’ was growing and in 1955 the church, rectory and guild hall were moved to their present location on Thornton Avenue, originally a five acre site with an apricot grove owned by Antone Faria.  A modern sanctuary was built when the buildings were relocated and in 1961 the present church school building was erected and dedicated to John Richard Sutton, the Senior Warden when St. James’ attained parish status in 1948.  Over the years, part of the land has been sold to the school district for the building of Norris School, and to the neighboring Assembly of God church.  The grass farm to the east became condominiums. The church campus remains on approximately three acres. 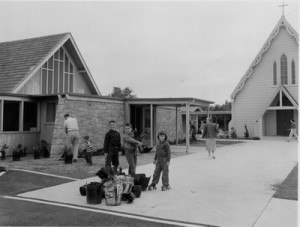 A plaque in the Guild Hall, windows in the church and a host of other items are inscribed with names memorializing the people and families in the Fremont and Newark areas who so richly contributed to the beginnings and life of St. James’.  More recently, a Memorial Garden was completed in 2001.  The names of all the people who have been involved creatively in the life of St. James’ are too numerous to mention.  However, their lives have spoken and continue to speak in the ongoing pulse of the church.  While church organizations come and go, several have continued the work started by those early pioneers, notably the St. James’ Men’s Club and the St. James’ Choir, both organized in 1921.  They are still in existence and are responsible for many additions, great and small, to the parish.  The St. James’ Ladies Guild (originally called the St. James’ Sewing Circle when it began in 1886) did yeoman work for the parish; the Altar Guild began in 1946.4

The original church, known affectionately in the parish as the “Little Church”, draws immediate attention.  A step inside brings you into a place of quiet meditation.  Dark wood and worn wooden pews face the bright light that comes through the glass above the altar.  The stained glass windows on either side do not permit too much light, but they tell the history of the place in dedicatory lettering.

A wood stove used to heat the building; now, only the flue remains.  Against the back wall there is a cross-shaped columbarium, awaiting the ashes of more members.  Early record books tell of marriages and burials.  Some causes of death listed were scarlet fever, childbirth, apoplexy, and one who “fell off a cargo ship” and was buried somewhere along the shore. 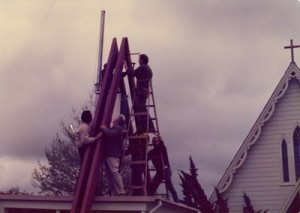 In 1973 we were fortunate to obtain a retired ship’s bell through the help of The Rev. Boyd Lyon, the rector at that time. He was able to do this by contacting his former shipmate from World War II, Captain Andrew Nisewaner. Captain Nisewaner was Boyd’s Captain on the destroyer, the Albert W. Grant. Captain Nisewaner arranged the loan of the bell from the Navy Department to St. James’, Fremont, with the stipulation that St. James’ is required to make an annual report to the Naval Historical Center in Washington, DC. The bell was installed with donations from the Richard Gifford Family with Edwin R. Wadsworth, architect, father of Richard H. Gifford and grandfather to Rick, Fred and Anne, designing the structure. Men of the parish did the actual installation. The bell is a welcome sound calling us to worship on Sundays at St. James’. The bell tower was replaced in 2009. 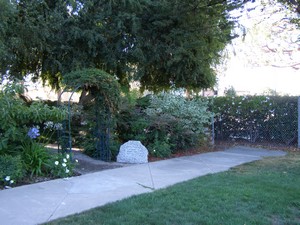 On February 27, 1977, the parish celebrated its 100th anniversary (dated from attainment of mission status in 1877) with the Rt. Rev. C. Kilmer Myers, sixth bishop of California, presiding at the Eucharist, baptizing and confirming, just as was done one hundred years earlier by his predecessor.  It was especially noteworthy that two sons of the first warden of St. James’ were present, Warren and Albert Healey.

The parish has continued to upgrade and extend its facilities over the years.  In the mid 1970’s the front part of the property that borders Thornton Boulevard was cultivated into a park area, which today hosts a labyrinth.  In 1998 a new administration building was completed and dedicated, and the Guild Hall was renovated to expand its meeting space as well as to add a new kitchen and meeting rooms.  Ed Abram and others installed a beautiful memorial garden which continues to be maintained by the Memorial Garden Committee. In 2007, a playground was installed for our children. 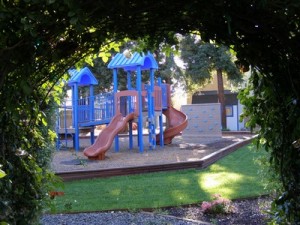 St. James’ is one of over 80 parishes and missions in the Diocese of California.  The diocese extends from Marin and Contra Costa counties in the north to San Mateo and Alameda counties in the south.  St. James’ is an Episcopal church and we are proud of our Anglican heritage.  We are both Catholic and Protestant.  We are Catholic in that we are organized as one of a number of parishes in a geographical area called a Diocese under the oversight of a bishop.  Through the bishop we trace our history back to the apostles and to our Lord Jesus Christ in an unbroken line.  We are Catholic, too, because our central worship is the Holy Communion as it has also been transmitted through the centuries.  We are Protestant in that knowledge of Scripture assures our salvation and in that laypersons of the church are equally responsible with the clergy for our Christian life and our corporate decisions.  We understand ourselves to be a vital, effective and affectionate household of faith.

In 2006, St. James’ redefined its mission statement as a prayer:

Most holy God, source of our vision, guide us to embrace the potential of this community to serve you in new and loving ways.  Direct us in our efforts as we work together with love for our neighbors.  Help us to welcome and accept all people.  We ask this in the name of your Son, Jesus Christ.  Amen.

May it always be so!

~ This introduction is a compilation of previously written materials on the history of St. James’ found in the church archives, compiled and edited by Janet Fischer. The paragraph on the bell tower was written by Maggie Shalar.

Join family and friends of Bud Pearson for a celebration of his life from St. James’ Episcopal Church, Fremont, to be held on Saturday January 28 2023 at 11am.

Join Rev Lori Walton in celebrating a service of Holy Communion for the Fourth Sunday after Epiphany from St. James’, with a sermon from Rev Bill Hale.

Join Rev Lori Walton in celebrating a service of Holy Communion for the Third Sunday after Epiphany from St. James’. This service follows our Annual Meeting with the Rector’s address as part of the sermon and the annual picture slideshow to wrap up the day.

The annual meeting takes place this Sunday January 22nd. It will be held in-person at St. James and live-streamed from 9:15am.