You may remember that Grammy-nominated folksinger John 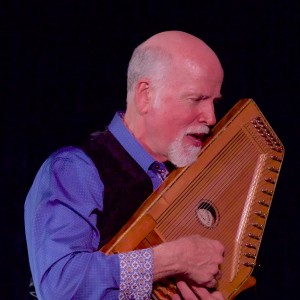 McCutcheon has sung at St. James’ every Martin Luther King birthday since 2004, except 2016 when he missed us due to being sick.  He is back in good health and ready to sing on January 16, 2017.

You may order tickets online here.

Is he ever ready! With a new recording out, his 38th, he has added another fourteen songs to his repertoire. Titled “Trolling for Dreams” the CD is “about love, old and new, aging and loss, hope and renewal,” to quote the CD jacket. I particularly like the rousing “Three Chords and the Truth” accompanied by a wild electric guitar and drums – John doesn’t usually bring an electric guitar with him, so his performing the song at the concert could be every interesting.

You may order tickets online here.

John’s virtuosity on many instruments (the aforementioned guitar, banjo, fiddle, hammer dulcimer, autoharp, piano, among others) makes his self-accompaniment an added dimension of the show.  If you remember, John gives the second part of the show over to us, the audience, with respect to choosing the songs he sings. He has sung “Christmas in the Trenches,” “Red Corvette,” “Soup,” “Old People in Love,” and “The Room at the Top of the Stair” among others.  Come prepared to request your favorite John McCutcheon song.

Bring your eyes and ears for one of the best concerts in the Bay Area. And bring your singing voice as well to sing along with John.

The Particulars: Show starts at 7:30 PM, 1/16/2016 in the Big Church. Tickets $27 for adults, $15 for children, five years old and under for free. You may order tickets online here. A prize drawing will take place in the Parish Hall at the intermission. A portion of the proceeds will go again to Abode Services, working to end homelessness in our communities.