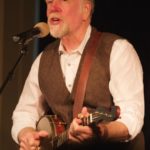 The John McCutcheon Concert on January 16 generated a whole lot of love.  From the woman/self proclaimed gardener who pulled a weed next to the parking lot just after she bought her tickets to the concert, to the person who wrote, “My parents came here in 1958, 7th grade education, no English. They found their way in a new country. I am an immigrant,” asking John to sing the immigrant song, there was a lot of love at the concert.

Yes, the concert nearly sold out with only a few bad sight-line seats not occupied. It seemed to me that everyone was having fun.  “I Wish I Was a Mole in the Ground” started the concert with song and story. He followed up with “This Ain’t Me” about his missing the Left Coast tour last year. He played “The Streets of Sarajevo” and “Leviathan” and finished the first half with “The Great Storm Is Over” sing-a-long.

“Immigrant” started the second half, followed by “Happy Adoption Day,” one of my favorites. The person who requested “Sara Tucholsky” wrote her name in inch-high block letters with a plaintive please at the bottom. John sang it. The story around the “Clarinet Polka” received many laughs and knowing looks; all enjoyed his playing of it on the hammer dulcimer. Of course he sang “Christmas in the Trenches,” lots of requests. He closed with “This Land Is Your Land. “  Then, a surprise encore, a new, unrecorded as of yet song I’ll call “Come, Come, Come” since he did not name it, a real rouser!

I read recently that people who go to church feel better. That was true tonight.  All in all, a Whole Lot of Love!