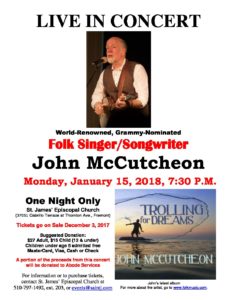 With a new album called “Ghost Light” just out, John McCutcheon is singing a lot of new songs this year. But do not be concerned that he will neglect his previous compositions. He loves to sing folks’ favorites. As one might remember, he even asks for requests during the intermission so he won’t forget your favorites.

John will be singing at St. James’ on January 15, 2018, Martin Luther King Monday, that Monday being our traditional time to have John perform for us starting at 7 PM. Yes, he will have the new CDs on sale, and you may purchase cookies and beverage as you have in the past. Will it be another rainy January when he comes? Possibly so, but John transforms St. James’ into the “Club Saint J” for that one evening a year and strangers become friends under his tutelage, a cozy atmosphere of immense enjoyment.

You haven’t heard John McCutcheon before? He’s a six-time Grammy-nominated folk singer with a musician’s command of many instruments and one of the few masters of the hammered dulcimer. He has recorded albums of other folk singers’ music as well as writing hundreds of his own songs. As he lives on the East Coast, he makes an annual trip to, as he calls it, the Left Coast. And this is it, his January trip for us, his fifteenth! Yes, he will appear in Berkeley, but that is the only other concert in the East Bay. Then you would have to go to Santa Cruz or Walnut Creek to hear him. After the St. James’ concert his next appearance is in Georgia.