“Best Ever,” someone said. “I just love those songs; takes me back to my childhood,” said another person. Of course, those songs meant a lot of Pete Seeger songs, the subject of John McCutcheon’s latest recording. Of the at least 22 songs, 7 came from John’s latest, To Everyone in All the World, a tribute to folk legend Pete Seeger on what would have been his 100th birthday. But not to limit himself, John spread his musical energies to the instruments he brought with him and to older songs that fit the evening’s mood and the many requests from the audience. He adapted Pete’s 12-string guitar piece, “Living in the Country,” to the hammer dulcimer. After teasing the audience with the name of Malvina Reynolds’ piece “Little Boxes,” he played her “God Bless the Grass” as a reminder of our environmental responsibilities. He thrilled Tallulah, Dave and Linda Nelsen’s granddaughter, with “Kindergarten Wall.” Agreeing to three requests for “Christmas in the Trenches” he wowed us all again with this tale of peace in the midst of war. With many references the Martin Luther King, Jr’s Day, he wove his personal story of his introduction to folk music tied to his “I Have A Dream” speech watched on his parents’ television, with Pete Seeger’s “We Shall Overcome” as his encore. 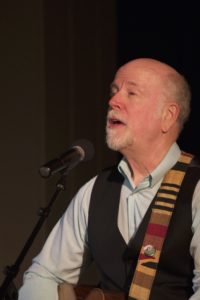 All in all, it was a thrilling evening with ardent fans and new listeners loving the concert. John even threw in a very non-McCutcheon, but requested song, “Love Potion #9” that the audience sang along with him. John’s Road Manager, Tommy, said after the concert, that John loves to come to Fremont because we SING. We are not afraid to sing. He loves that energy, the feeling that we are part of the show. The preliminary word is that he would like to come back next year on MLK Day and we want him back. It’s kind of like, in the song “She Just Dances,” “more Poppy, more Poppy, more!”

Many people want to hear his songs on a recording, but he has not recorded all the songs he sings, especially some of the traditional folk songs like “900 Miles” and “Cotton-eyed Joe,” songs that one can only hear in John McCutcheon’s concerts. The thrill of his live performance, his stories told to make the songs relevant, and the special old songs make John’s shows really special, an event only shared between him and us. The packed house this year made the concert a thrill for themselves as well as for John McCutcheon.
~Bruce Roberts 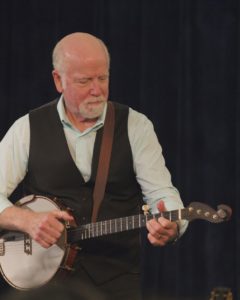 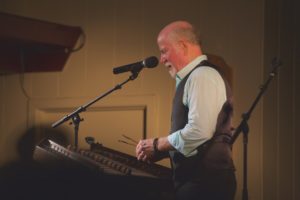