See the article in DioBytes!

On Saturday, June 16, about 30 volunteers, together with six future homeowners, four Americorps interns, and several “regular” volunteers, participated in a Habitat Build Day at Central Commons in Fremont. The 18 St. James’ and 3 St. Anne’s volunteers were joined by several from St. Timothy’s in Mt. View, and St. Andrew’s in Saratoga, making a great showing for the Episcopal Church in the SF Bay Area.

Most volunteers worked mainly on hanging drywall, requiring hours of steady hammering by hand, while some helped to ready the site for a coming inspection and others rearranged and replenished needed supplies.  Sandwich boxes from Panera were provided by St. James’ for all, partially underwritten by Penny and Ken Trant. Others brought pies and cookies for that all-important sugar 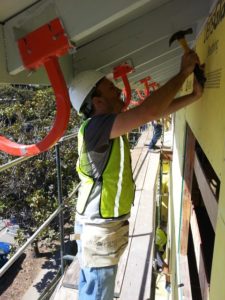 There’s a saying about trying for perfection in celebrating the Eucharist:  as long as no one got hurt and everybody got fed, there’s nothing to worry about.  The same could be said about our build day as another expression of Eucharist:  everyone was fed (with some leftovers), we did our part to build up the Kingdom, and while some muscles may have ached a bit the next day, no one was injured in the process.  Thanks be to God! 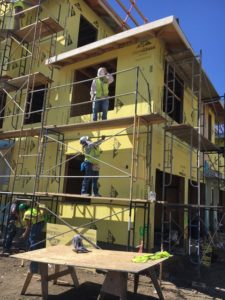 Perhaps there will be another St. James’ Build Day down the road, but in the meantime, you can volunteer as an individual. More information can be found at the East Bay/Silicon Valley Habitat for Humanity website: https://www.habitatebsv.org/. 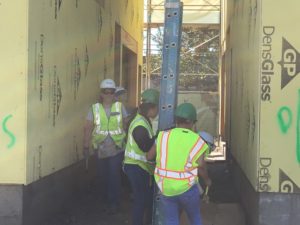 Join Rev Lori Walton in celebrating a service of Holy Communion for the Fourth Sunday after Pentecost from St. James’.